For those of you who don’t know October is National Bullying Prevention Month. Usually when kids come in this is one of the main concerns of parents. Or its to give their kids discipline, respect, lose weight, etc. The last Friday of September, six kids tested for yellow belt. I was incredibly proud of each and everyone one of them for their growth as people as well as martial artists. Not because they can protect themselves against bullies or because they are great Jiu-Jitsu practitioners but because they aren’t bullies.

When a child learns martial arts, they don’t just learn how to defend themselves. They learn life skills that translate to situations off the mat as well. Being respectful, problem solving, dealing with failure, hard work, leadership, goal setting. This turns them into better people. The type of people who will be less likely to bully in the first place. 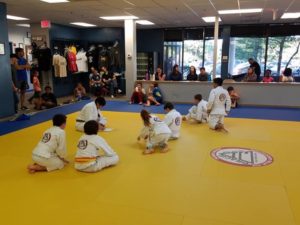 After earning their yellow belt. The kids walked around with a new air about them. I new type of confidence. Knowing that they had set a goal for themselves and they had accomplished that goal. They already felt like leaders. So when went straight into the Buddy Bash right after the belt test, they were all super excited to share their love of Jiu-Jitsu with their friends.

We had about 75 kids show up for the Buddy Bash. That’s right 75 kids! It was a ton of fun! The kids got new shirts. They all learned some self-defense. Then we did games and pizza. All and all it was a pretty special weekend. 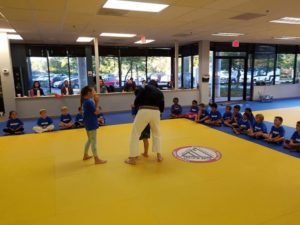